When Old Friends Come to Call

Our landscape architecture firm is located in an old Victorian home, built before 1900. Recently a couple of people have stopped by asking to see the house as they knew one of the previous homeowners. Emmett and Rose Fitzgerald lived in the home from at least 1940 until 1983, when Rose sold the house following Emmett’s death. That was the last time the building was used as a residence; it has housed businesses since then. It has been fun to show the building to people who had been there when it was a home. 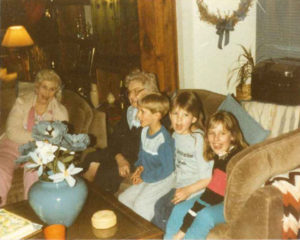 The latest visitor was a young woman who used to come with her dad when he called on Emmett. She brought this picture of Rose, and even though the photo was not taken in this house, we had seen no pictures of the Fitzgeralds so we were pleased to get this one. She was able to answer questions we had about some things that seemed odd – such as the tile in a small storage room. That was originally a bathroom, we were told. Through the stories we were able to picture the small girl having a tea party with Rose while her dad and Emmett discussed business in the outbuilding behind the house. The house seemed like a mansion to her, and with all of its small rooms it must have appeared that way to a small child. So if someone comes knocking at your door asking to see your house, let them in. You never know what stories you will hear!