In a previous post, which you can find here, I wrote about the house plans that were sold by The Ladies’ Home Journal from 1895 until approximately 1919. I recently came across the book Home Building and Furnishings by William L. Price and William Martin Johnson, which was published by Doubleday, Page & Company in 1903. Price was one of the architects hired by Edward Bok, editor of The Ladies’ Home Journal from 1889-1919, to design house plans that could be sold for a modest price though the magazine. Bok felt that small houses were too often designed by the builder and not an architect, without the benefit of good design from an architect and often not using the space in the house to its best advantage. The plans were wildly successful, and Price states that over 500 houses were built in one year from the plans given!

Price hoped that in publishing Home Building and Furnishings, The Ladies’ Home Journal plans would continue to prove of value to prospective home builders. The first part of the book is by Price and is a discussion of designs of houses that appeared in The Ladies’ Home Journal. The articles that accompanied the designs in the magazine attempted to assist homeowners in building small homes without having to solely rely on builders because they could not afford to hire an architect. Eight house designs are covered in this book, as well as three model small churches, a cabin and a tent. The last two sections of the book are by Johnson and cover remodeling the front door and use of windows in a house. 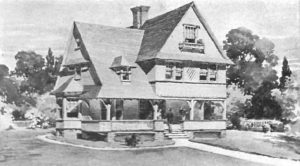 The second design that Price discusses in the above-mentioned book is A Model Suburban House Which Can be Built for $2000 to $2500 Anywhere in America. The design first appeared in the July 1897 issue of the Journal. In the book, Price not only provides a sketch of the house exterior, he also includes the floor plans and a photo of the entry foyer. Further, he describes each room of the house in detail, explaining the thought process behind his design. Our house was built from this plan fairly closely to his specifications, with the exception of the exterior of the house. Price states that the “exterior of the house is all of shingles, its picturesque character depending upon the simple, low roof-lines, — the outside neither having nor requiring any elaborate detail…” He adds that “Plaster may be used in place of shingles for the walls, and tiles for the roof, but clapboards are not recommended for this type of structure.” Wood siding was used on our exterior. Here is the architect’s illustration of the house, and below it is our house as built in 1902. 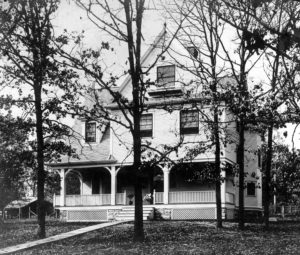 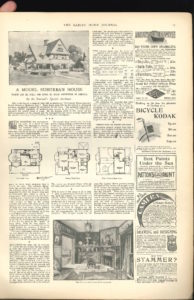 On the Internet I was able to locate a copy of the July 1897 issue of The Ladies’ Home Journal, so I purchased it. It is interesting to think that the Morton family, who built our house, probably looked at the magazine and decided that this is the house they wanted to build.

In June of 1898, Bok announced in the magazine that he was holding a contest with a prize of $100 to go to the best house built from a plan purchased from The Ladies’ Home Journal. Five other smaller prizes were also offered. Contestants had to submit exterior and interior photos of the house, as well as a legally attested builder’s declaration to prove that the house had been built within the price that the The Ladies’ Home Journal claimed it could be built. Over 5,000 submissions were received! The results were published in the June 1899 issue of the magazine, with the winner being James Riley of Pittsburgh, PA. Coincidentally, his house was built using the same plan as our home. 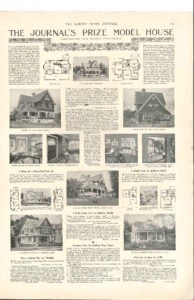 It is unclear how many homes were built from The Ladies’ Home Journal plans, but it is estimated that the number might be 30,000. Theodore Roosevelt once remarked that Bok was a man “who changed, for the better, the architecture of an entire nation.”