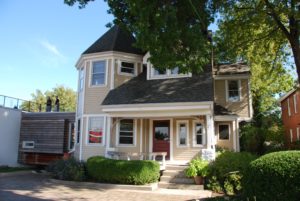 A couple of years ago I began researching the history of a house that we own and use for our business in Shrewsbury, Missouri, which is a suburb of St. Louis. Because I have run into a number of challenges in my research, I thought it might be helpful to let you know the approach that I have taken in case it can be of assistance to you in your research. According to St. Louis County, the house was built in 1900. While that information gives me a starting point, the date used by the county is only an estimate. The house could have been built earlier, but it took until 1900 for the tax assessor to document the house for tax purposes. In fact, we had an addition put on the house several years ago, and the contractor said that based upon the construction materials (most notably the nails) used in the original house, he would date it at pre-1900. That information gives me an additional clue as to when the house was built.

The land upon which the house sits was part of a farm owned by John J. Murdock (also spelled Murdoch), who purportedly was a General in the Civil War. I will write more about John Murdock in a future post, as he was quite an interesting fellow (though not a General or any kind of officer in the war). Just under 300 acres of the Murdock land was ultimately obtained by Farrar & Co, who formed the Shrewsbury Park Land and Improvement Company. They filed their first plat with the county for part of the land in 1889, dividing it up into predominantly 50′ x 150′ lots which they offered for sale at the cost of $100 per lot. Our property is part of this first subdivision. The best way to determine land ownership is to trace the deed transactions on the land. In St. Louis County there is an index – sort of – to the grantors (sellers of the land) as well as the grantees (buyers of the land). The reason that I say “sort of” is because while the index is in alphabetical order, it only sorts by the first letter of the name. So in order to look for Shrewsbury Park and Land Improvement Company I have to look through ALL of the names beginning with S. The first issue I ran into is that the Shrewsbury Park and Land Improvement Company sold LOTS of land. There was no way for me to know what piece of property was being sold without looking at the microfilm of each and every deed. And I didn’t even know for certain which year to look at. Knowing that I might not have enough years left in my life to follow through with that approach, I decided to attack the issue from the other end.

In St. Louis County you can go online to the county government website, enter your address and obtain a list of the last few deed transfers. In my case, I was able to see the grantors and the grantees back to 1985. If your county has this search available to you, it can shave many years off your research of the deeds.  Again, since I don’t know when the couple listed in 1985 bought the house, it would have been very time consuming to go through the grantee index year by year. So I turned to some other genealogical resources to help me narrow down the years. I will discuss my next steps in a subsequent article.