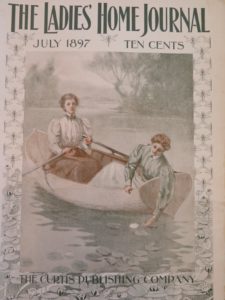 Did you know that the Ladies’ Home Journal began publishing house plans in the magazine beginning in 1895? Edward Bok, editor-in-chief of the magazine wanted to offer readers professional architects’ plans for simple, attractive, suburban homes that could be built for a moderate amount of money. He approached a number of leading architects in the United States, but they were resistant to the idea. He finally was able to convince William Lightfoot Price of Philadelphia to design a series of houses which could be built from $1,500 to $5,000. The architectural drawings could be purchased inexpensively ($5), making it possible for more Americans to not only buy homes, but to also buy well-designed houses.

The idea quickly caught on, and two more architects signed on – Ralph Adams Cram of Boston and Edward Hapgood of Hartford. As sales of the plans escalated, more and more architects signed on. The most famous architect, perhaps, was Frank Lloyd Wright, who designed three houses for the magazine. His designs included the now well-know prairie style home.
At least 169 plans were published over 25 years by 82 architects. It is impossible to know how many houses were actually built from the plans, but the magazine itself in 1916 ran a four page spread of photographs of houses built from the designs, and went on to claim that 30,000 were in existence. 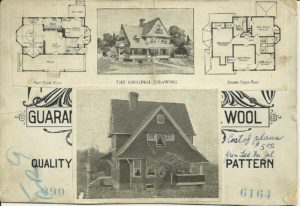 House Plans back of card

My reason for writing this post is that I received an unexpected envelope in the mail last week from the great-granddaughter of the man who built my house in 1902. In it was a picture of the house, which I know to be taken after 1929 because my neighbor’s house appears in the photo, and a post card containing photos and drawings of  house plans. The card indicates that the plans were purchased for $5 from Ladies’ Home Journal. My house as built in 1902 does not look exactly like the photo on the card, but homeowners were allowed to make modifications for a slight fee. The interior layout, however, is pretty darn close to the drawings. I had no idea that plans like these existed, or that my house was built from them. But it makes me curious to learn more about the Ladies’ Home Journal homes. 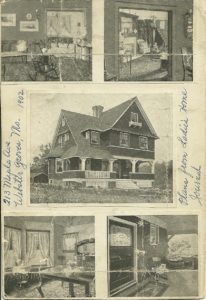